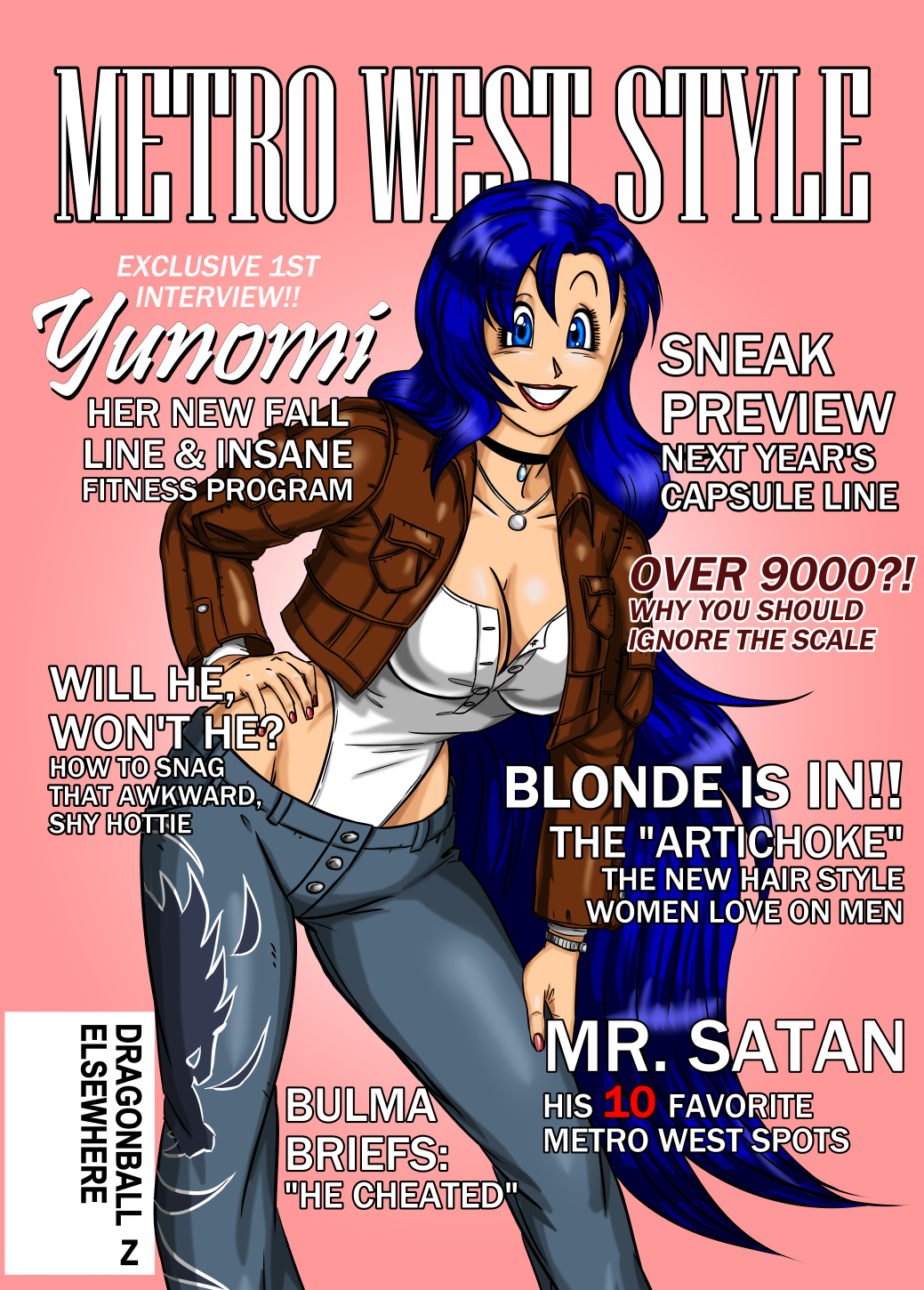 Average Rating: 5 (3 votes)
Rate this comic
Author Notes:
RMK 24th Nov 2016, 12:07 PM
Happy Thanksgiving to my North American friends and greetings to everyone else! I made this picture in between working on the new issue to help flex my creative muscles.

Given that Yunomi is a fashion designer, I wondered what it would look like if she was featured in a Women's Magazine. That made me wonder what Women's Magazines in the Dragonball world would write about. It got funnier the more I thought about it. My wife helped me get the overall look correct. Her suggestion was to put as much cluttered, oversized text into the image as possible to make it look ugly. (She does not like women's magazines).

I am very pleased with how Yunomi turned out here. I thought this would be a nice way to spotlight her character in-between the main story arc.

Thanks to everyone for their continued support!
Edit Delete

User comments:
TimTomLee (Guest) 27th Nov 2016, 12:02 PM
RMK, It's the little details like this that you put in your story that makes you one of my favorites. If you actually made a full magazine with the interviews, I would buy it. Thanks for your hard work and enjoy your feast.
Edit Delete Reply
RMK 27th Nov 2016, 7:03 PM
Haha don't tempt me with more side projects. I'm always happy to engage readers' imaginations.
Edit Delete Reply
Marvin (Guest) 27th Nov 2016, 1:00 PM
Great work, as always. The quality of Yunomi's hair alone is absolutely stunning! One would be hard pressed to properly reproduce all those fine textures, well placed glosses and delicate details on anything less than photo paper.

Also, thank you very much for taking the time to read, process and respond to the comments of your fans.
We don't take your effort for granted and it always brightens up our days. :)

Edit Delete Reply
RMK 7th Dec 2016, 1:15 PM
I was definitely planning a closure arc with Vegeta, but it was far less robust than my "Unlikely Allies" short story. To be honest, I don't know why I didn't think it would work as a short side story within Elsewhere, but you make a good point. I think that settles it :) thank you.
Edit Delete Reply
JakeTheSnake (Guest) 8th Dec 2016, 8:40 PM
I remember feeling really bummed out after reading the summary of it and later finding out that it was abandoned. Thank you for taking the time to hear my ideas.
It means the world to me that my ideas MAY Have influenced this story that I fell in love with even if it is just by a small margin.
Edit Delete Reply
JakeTheSnake (Guest) 6th Dec 2016, 8:05 PM
Last one, sorry it has been Finals week and lately whenever I get a moment of rest ideas kept coming to me about ways to improve DBZ ELSEWHERE so I started to jot some of them down on a word document and decided to share them with you. If you want too incorporate any of these ideas I would be beyond happy, but if you don't that is fine to. Whatever you write, I know it is going to be good because your story comes from the heart. It is very apparent that you care about my boy Yamcha and I can't help, but get behind that. Keep doing you, and ROCK THE DRAGON.
Edit Delete Reply
lightningbarer (Guest) 11th Dec 2016, 10:46 AM
I just realised...that top.
It's a One Piece top.